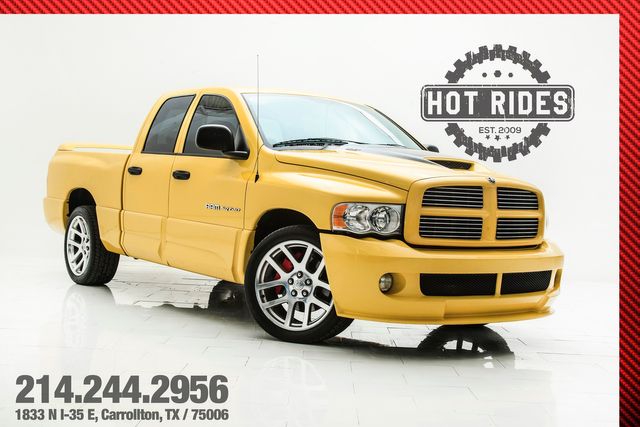 *This calculator is for informational use only and is based on the information you provide. Actual loan amounts and payments will vary based on additional items such as taxes and fees as well as the actual interest rate available to you from a financial institution.

While Yellow Fever was the bane of travelers in the 19th century, Dodge’s version had a decidedly different effect on those who caught it. After all, the Yellow Fever Edition of Dodge’s full-size Ram SRT-10 lasted but a single year, 2005, and was limited to 500 cases across two platforms. This is No. 461 of those 500 built, and it’s one of only 300 created with the longer crew-cab configuration.

Perhaps you are wondering what made this 21st-century version of Yellow Fever so serious. Well, it started with an 8.3L Viper V-10 engine, the factory-rated 500 HP engine that’s success had been proven on the world’s greatest race courses in its namesake Viper. These trucks had the V-10 engine, complete with an air-box intake and cast valve covers. This was backed by an automatic transmission. To keep it from becoming lethal at a potential top speed that approached 150 MPH, the factory balanced the raw power with some serious upgrades like all-wheel drive, 4-wheel disc brakes, 22-inch spoked aluminum wheels, wide tires, specialized suspension parts and power steering. Styling is almost as extreme, starting with the EXCLUSIVE Solar Yellow paint, black graphics and V-10 notations. Raised Viper logos are also found on various components inside and out, coupled to a scooped hood with a special fanged hood stripe, & signature rear spoiler. Inside, these unique machines received exclusive suede and leather upholstery done in a combination of black and yellow materials, with special callouts denoting the V-10 powerplant on the seat headrests. The interior further features accessories like climate control, power seats, factory Infinity Audio system, cruise control and tinted glass.

This example has only driven a total of 60,091 original miles since leaving the assembly plant. A Yellow Fever condition should warrant serious attention, & If you have it, we have the cure!

ALL ORIGINAL, NO MODIFICATIONS!