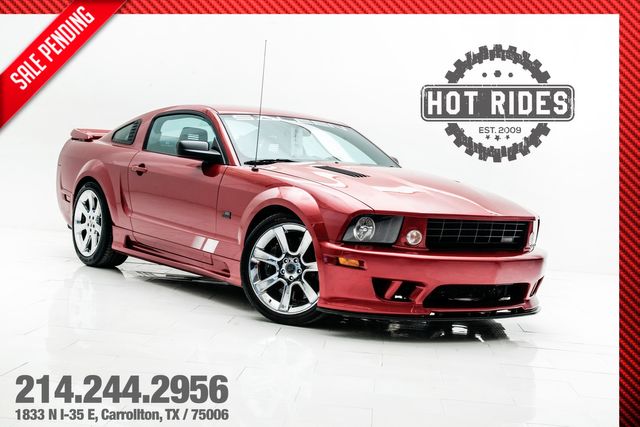 *This calculator is for informational use only and is based on the information you provide. Actual loan amounts and payments will vary based on additional items such as taxes and fees as well as the actual interest rate available to you from a financial institution.

The biggest name in hot-rod Mustangs for the past 20 years was Saleen Incorporated. With their limited edition high performance vehicles Saleen wasn't just a garage bay tuner, they we're an OEM level manufacturer that, in addition to selling an in house production car, assembled the Ford GT sports car and up-fitted race proven performance parts and packages for regular production Ford vehicles. This 2006 Mustang S281 Extreme is a great example of just what Saleen could do with the mustang; perhaps the best all around example! This is the pinnacle of "top of the line" Saleen style and 550 horsepower Saleen Supercharged, Built, & Forged V8.

This 1-OWNER (!!!) S281 Extreme #98 (full serial # s281e 06-0098) has every trick Saleen knew built into its sleek, Redfire Clearcoat Metallic body. Fit and finish is exceptional, thanks to the largely hand-built nature of the custom Saleen add-ons, and the paint is simply amazing thanks to major improvements in Fords factory paint process. Despite looking a lot like a stock Mustang, the front of the car has been completely redesigned and incorporates many subtle tweaks that add character to the cars impressive OEM look. Installed over the supercharger is a Saleen Super-Flo hood that adds clearance in the engine bay and features black heat extractors just in front of a “Saleen” branded windshield. Below the hood, a re-designed injection molded front bumper cover features the cars serial number in silver, and hangs a carbon fiber air splitter just above the pavement. At the top of the bumper, traditional Mustang headlights are split by a Saleen grille that includes a driver's side “Saleen” emblem and round turn signals incorporated into its edges. At the side of the car, the classic Mustang profile is complemented by aggressive Saleen rocker panels and throwback C-pillar vents that recall classic Shelbys of the 60s. Ornamentation is kept to a minimum with front fender “S281 Extreme” emblems and Saleen chevron graphics at the base of the doors providing the only breaks in the cars red paint. On the decklid, you'll find that Saleens love of large rear spoilers, which are as functional as they are attractive, was alive and well in 2006. That large rear spoiler combines with custom fender, trunk and bumper extensions to lengthen the chunky Mustang body and houses a custom rear valence which narrows down the factory tail lights. Below that rear valence, a re-styled rear bumper features “Saleen” lettering, center mounted exhaust and a second carbon fiber lower air diffuser. All factory original to the S281E!

Under the hood, there's power—lots and lots of power. Augmented with a Saleen designed supercharger, the cars modular 4.6 liter V8 is rated at 550 horsepower on 91 octane gas. The Saleen supercharger delivers boost immediately across the powerband by quickly ramping up in a smooth rush. When you let it wind out, you'll appreciate Saleens "Power in the hands of few" motto with some personal conviction. It means triple digits and nowhere near slowing down. When making boost, the signature supercharger whine out the intake is a siren-like scream! The supercharger is packaged well too, sitting deep in the V between massive cylinder heads and exhaling upwards through an air-to-liquid intercooler before being force-fed into the intake manifold. The car's engine bay is exceptionally clean.

The S281 Extreme uses a rugged Tremec 6-speed manual transmission driving a 3.55-geared rear end, which makes for some spectacular and astounding acceleration when you need! Years ago, Saleens were criticized for their harsh ride, but those days are long gone. Taking advantage of the new Mustang's more rigid Macpherson front and 3 link rear chassis, Saleen engineers carefully chose springs, shocks, and sway bars that improve responsiveness without sacrificing ride quality. In fact, this may be the greatest improvement granted by the new Mustang platform: the ability to corner and handle like a thoroughbred without the hammering of previous performance suspensions. Exhaust is expelled through a signature Saleen center exit plished system. Braking is handled by “Saleen” branded calipers that clamp slotted rotors and sit behind 20 inch forged-aluminum Saleen wheels which have been optioned in chrome.

Inside, Saleen makes the Ford interior its own with leather upholstery and plenty of signage, from the seatbacks to a subtle, authenticating black badge on the dash. A six-way power driver's seat with adjustable lumbar support is on hand and Saleen is sure to employ Fords MyColor feature allowing custom instrument colors on the main cluster, which has Saleen calibrations and faces, and a 200MPH speedometer. Props to Saleen for bucking the now-tiresome white-faced instrument trend, instead using handsome black backgrounds. Other Saleen standard interior bits are custom floor mats, a steering-wheel badge, some rather businesslike pedal pads, clean sill plates, and an aluminum shift knob atop their own short-throw shifter. Of course all the usual power windows, locks, and other Mustang GT items are on hand and a set of chrome trimmed boost and fuel pressure gauges live atop the dashboard, keeping an eye on the supercharger's activities. This car's glovebox was also personally autographed by Mr. Steve Saleen himself!

Documentation for this car includes the owner's manual, and a small Saleen S281 Extreme brochure.

This S281 Extreme has been driven, and at the same time, well preserved & maintained. This car has mind-boggling performance and is probably the most serious performance 05-09 body style Mustang your money can buy. Best of all, you can buy it for less than half of what the sticker said! Take advantage of this opportunity to acquire what may very well be the best Mustang ever built.

THOUGHT TO BE LESS THAN 10 REDFIRE CARS

***WE HAVE ORDERED AN ORIGINAL SALEEN WINDOW STICKER, HOWEVER, WE WERE QUOTED 4-6 WEEKS FOR ARRIVAL. THIS WILL BE INCLUDED WITH THE SALE OF THE CAR ONCE WE RECEIVE IT!***

Don't miss out on your chance to own this piece of American history! You will not see an automobile with this much HISTORY AND IMPORTANCE on the market every day.